Our research focuses on developing functional polymeric materials and self-assembly strategies to address problems that reside at the interface of Materials Science, Chemistry, Chemical Engineering and Biology. We bring our extensive organic/polymer synthesis capabilities, as well as expertise in thin-film and morphological characterization to solve problems in microelectronics, photonics, optoelectronics, and biology. The five specific areas of research are: 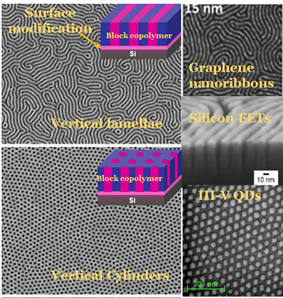 The ability to control the orientation of the self-assembled BCP domains in thin-films is important in areas such as microelectronics, magnetic data storage, membranes for filtration, photonics and optoelectronics. We have pioneered the (1) a simple chemistry for surface modification to control the BCP domain orientation, and (2) understanding of the assembly rules for BCP thin-films.

Impact of this work is in uncovering fundamental rules in thin-film assembly of block copolymers and its role in enabling and probing new electronic and optical effects under confinement in a range of materials. Examples include Graphene plasmonic resonators, room temperature QD lasers based on III-V materials, and Graphene electronics. 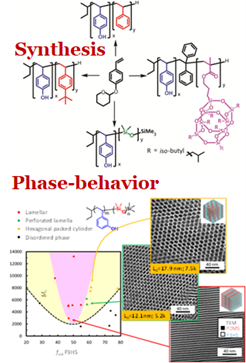 We have developed block copolymer (BCP) materials that thermodynamically self-assemble into sub-10 nm dimensions over large areas. We are a leading group in the self-assembly of BCPs into thin-films as templates to transfer patterns to the underlying oxide or semiconductor surfaces. This process is termed as Directed Self-assembly (DSA).  We have developed protected monomers, anionic polymerization methodologies and means to incorporate inorganic elements into organic BCPs to meet a set of stringent requirements for DSA.

Impact of these new materials in DSA lies in the simplicity and scalability of the BCP chemistry, and the ability to tune the encoded size and morphology information for specific applications. 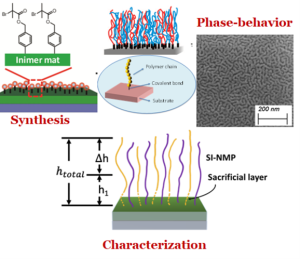 Mixed polymer brushes exhibit a range of morphologies due to their changing composition profile in response to external stimuli. A major experimental road block has been the uniform growth of high grafting density mixed brushes with controllable grafting ratios and predictable chain lengths especially on planar surfaces. We have developed a highly versatile approach to grow polymer brushes from a variety of substrates with high grafting density. The design involved a cross-linkable copolymer coating containing an inimer (a polymerizable initiator) as a comonomer.

The impact of this work is to enable interrogation of predicted phase behavior of various types of polymer brushes as we can access the right grafting density and chemistry. 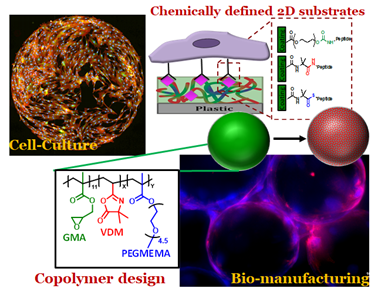 A particular challenge inherent in stem cell biology involves understanding the influence of biological signals in a cell’s native microenvironment. There has been a growing interest in developing biomaterials to mimic and selectively express parts of the native ECM. We have developed a polymer coating to create chemically defined, xeno-free, serum-free means of cell expansion.

The impact of this work is in developing easy to scale polymer coatings that can be applied on 2D and 3D platforms to enable bio-manufacturing of therapeutic cell lines. These coatings have tremendous potential in tissue engineering that is the current focus of the group. 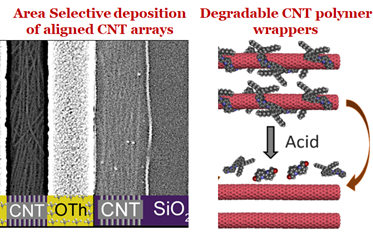 Semiconducting carbon nanotubes (CNTs) have incredible promise for next-generation high-speed, lowpower logic circuits. We have made key advances in the CNT ink chemistry as well as the assembly methods in collaboration with the Arnold group. We have focused on ink chemistry that allows removal of all the organic material such as the polymer wrapper once the CNTs are deposited onto the substrate. Our assembly methods result in highly aligned CNT arrays where we can control their selective deposition.

Impact of this work is far reaching in microelectronics, RF amplifiers, solar cells, and sensors. 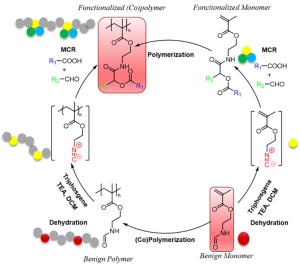 There are a number of highly reactive functional groups in organic chemistry that are very useful for multicoponent reactions. These reactions often integrate 2-3 functional groups in one step in an atom efficient manner. These funcitonal groups are often hard to handle due to toxicity, unpleasant order on instability, hence their applicability in polymer chemistry is fairly limited. We aim to leverage the rich literature in orgnaic chemistry to bring these reactions to polymer chemistry in a manner that they are easy and safe to handle.

Impact of this work is in facile modificaiton of existing and new polymers to impart specific properties such as degradability, or spectic fucntion without handling toxic intermediates.